With Bitcoin witnessing widespread institutional adoption and significant price rise has become the choice of crypto enthusiasts across the world. As a result, to strengthen its accessibility the concept of Bitcoin ATMs has been envisaged into the crypto sphere. Ever since its first launch in 2013 at Waves Coffee Shop, Vancouver Bitcoin ATMs have carved out their niche in this prominent industry.

What Are Bitcoin ATMs?

The concept of Bitcoin ATM is largely focused on allowing higher and easier user engagement in financial transactions. Unlike traditional ATMs, users are allowed to buy and sell Bitcoin using cash through Bitcoin ATMs. These machines comprise of monitor, QR scanner, bill dispenser, and bill acceptor.

All these components make Bitcoin transactions quicker, easier, and more secure. Bitcoin ATMs are nowhere connected with the bank accounts instead, they operate in direct relation with cryptocurrency exchange but require internet connectivity.

How do Bitcoin ATMs work?

The operating ecosystem of Bitcoin ATMs revolves around three major aspects and boosts Bitcoin availability.
Identity Verification: After spotting the Bitcoin ATM in your locality, the next step is to proceed with identity verification. Generally, the verification protocols vary for each machine operator yet the most basic step is to input mobile numbers.
Then, the person receives a verification code in the form of a text message. Using this code, the person confirms his identity and proceeds with the transaction. Once the users are logged into the machine, they have to decide whether to buy or sell Bitcoin.
Buying Bitcoin: If users intend to buy Bitcoin, then they are supposed to feed cash into the machine based on which it generates QR codes. This QR code originates from a cryptocurrency wallet which is there on the users’ mobile devices. As a result, by scanning these QR codes users can make a successful Bitcoin purchase in exchange for cash.
Selling Bitcoin: On the other hand, selling Bitcoin is also quite similar and simpler. Firstly, the users have to send Bitcoin from their respective digital wallets through the QR code generated by Bitcoin ATMs. Based on the machine type, the Bitcoin ATMs dispense cash; some process it immediately while other Bitcoin ATMs might take longer. Generally, this process is extremely quicker than any other exchange procedure.

Why use Bitcoin ATMs?

In less than a decade, Bitcoin ATMs have become the talk of the town and undoubtedly the most accessible method to transact this prominent cryptocurrency.

With the long list of benefits it provides, the concept of Bitcoin ATMs has surged to new heights in the years 2020 and 2021. So, let’s understand how Bitcoin ATMs have revolutionized the Bitcoin ecosystem.

Simpler Procedures: Buying or selling Bitcoin through Bitcoin ATMs is way simpler than trading through any Crypto exchange. It is considered the easiest method for crypto beginners as it only requires a Bitcoin wallet, cash, and a verification code to complete the transactions. Moreover, most of the Bitcoin ATMs provide customer support services 24*7 and all the users’ queries.

Secure Transactions: Bitcoin ATMs are non –custodial which means that only users have complete ownership of their coins, unlike crypto exchanges. Moreover, very little personal information is required by the machine whichindicates a lesser risk to privacy in case the systems are hacked.

No bank accounts required: The non -bank account holders do not find it restrictive to trade Bitcoin as Bitcoin ATMs provide a platform where no bank accounts are required to store funds. The ones with a phone number and digital wallets alone are eligible for buying, selling, or storing their coins safely in the machines.

No more cash storage issues: Usually, people find it quite risky to carry excessive cash in hand. Moreover, mere storing cash does not enhance its value. As a result, people find it appropriate to convert this liquid asset into an investment that they can use at their convenience. 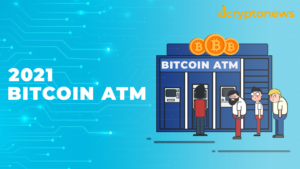 According to the Finbold study, there has been a significant rise in the number of Bitcoin ATMs installed across the world. In the first three – quarters of 2021 there was a total of 13,242 Bitcoin ATMs installed globally. So far July 2021 recorded the highest Bitcoin ATMs installations which were around 1,963.
Moreover, the study says that North America alone dominates the other continent with its 26.489 machines representing the 93.5% share of total machines installed. Recently, Walmart has also confirmed its plans of installing 8000 Bitcoin ATMs under its pilot program.
Furthermore, the Crypto ATM market was approximately valued at $54.8 million in the year 2020 and the compounded growth rate for the year 2021 was forecasted at 58.7% CAGR.

Inarguably Bitcoin ATMs have emerged as the key component for Bitcoin transactions in recent times. The widespread adoption of Bitcoin is also a result of this prominent concept where exists less hustle. Moreover, the the beneficial approach of Bitcoin ATMs has paved an innovative way in the progressive crypto ecosystem which is expected to flourish with time.

2 How safe are Bitcoin ATMs? Bitcoin ATMs are considered the most secure and safest way to conduct Bitcoin transactions as they are entirely non – custodial.

5 What is the buying limit of Bitcoin ATM per day?Most Bitcoin ATMs operator provides a minimum of $5 to $20 per transaction whereas the maximum ranges between $3000 to $9000 per day.

Tags: How do Bitcoin ATMS Work?